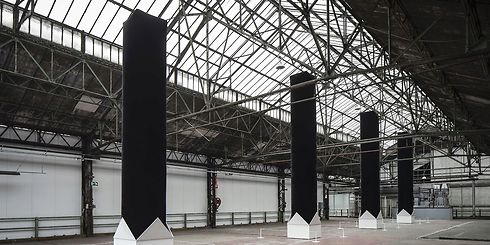 BOGUS I at Chroniques Biennale

Is what we see really what it seems? BOGUS I consists of four enormous inflatable sculptures, made out of the black fabric characteristic of the theatre. These automated inflatable sculptures appear and disappear again into their respective boxes. Together, they form a landscape of performative objects. The installation suggests a post-apocalyptic environment, after the end of humanity, when machines have continued without us and have taken proportions we couldn’t have imagined up until now. At the same time, they are sculptures an image of the alienation, the violence and the spectrality of a society in which everything has been turned into a commodified disposable. The size and the ambiguous material turn BOGUS I into an uncanny entity. Or as the Viennese philosopher Günther Anders would formulate it: we are so clueless and breathless when confronted with our own products, as if they were objects delivered to our homes, unsolicited, by inhabitants of a strange planet. 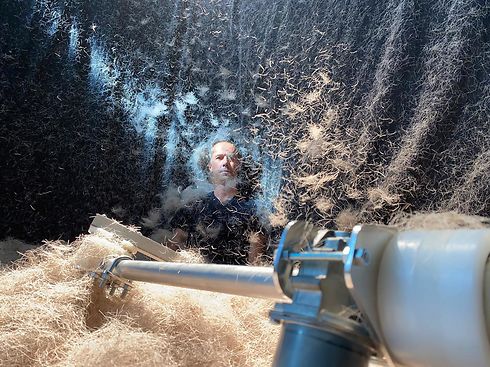 In this project Lawrence Malstaf wants to explore the kinetic and tactile qualities of a large mass of primal matter slowly descending and threatening to flood the exhibition space. Some precision machines try to control and contain the unpredictable and mysterious compound in a Sisyphean struggle to hold off the inevitable. Does it become a state of conflict or an attempt for symbiosis in the eternal drama of order and chaos inherent in both our physical and mental reality? 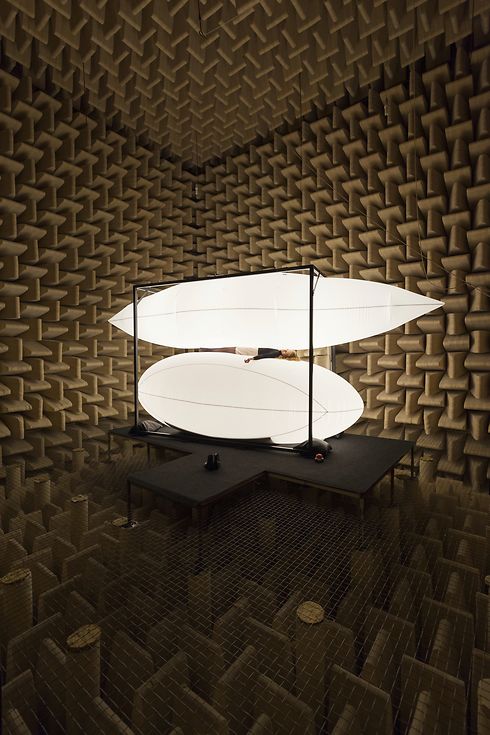 The Physical Mind at KIKK 2022

With The Physical Mind, Vonk seeks to let participants experience the relation between their physical and mental states by applying physical pressure to the body. The installation consists of two inflatable objects. The participant lays down in between, is lifted up and gently squeezed between the two inflatable objects. The lifting creates an unstable feeling, a slightly stressful sensation that is directly contrasted with a secure feeling of being gently squeezed between two soft objects. Paradoxically, this forced physical stimulus reduces feelings anxiety and paradoxically stress and the flight- or fight-response disappear. The participant experiences and increased sensitivity to stimuli, normalised alertness and a calm state of mind. The positive effects of this increased receptivity can continue for a few hours after the experience. The installation evokes empathy in bystanders who witness a participant undergo the experience. 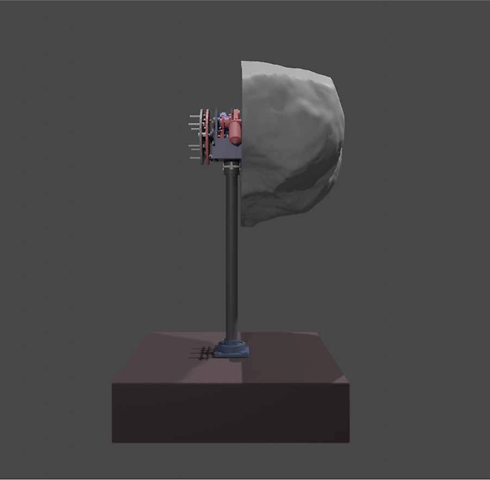 Entities in Panorama 24 - On the other side

The sculptures in the series 'Entities' are performative machines, objects that move by virtue of their own independent energy source. They perform without any interaction or connection with people. These autonomous mobiles are powered by solar, wind or residual heat energy and follow the rhythm of the natural element that sets them in motion.

In ENTITIES #1, two hollowed-out halves of a boulder spin silently opposite and around each other. The motor that drives them is connected to solar panels. Heavy material is thus connected to "light." As with the planets, the sun here too sets a rock in motion - albeit in a different way and on a different scale.

The ENTITIES series is an investigation of energy as an ever-changing, unstable natural phenomenon. The machines powered by such a source consequently follow a similar unstable rhythm. This goes against how almost all appliances and devices work: they need a continuous, stable supply of energy. Electricity producers therefore generate much more energy than is actually needed or consumed. The study of unstable energy thus poses a fundamental question: what if our technological environment were not based on continuous and instantaneous efficiency and instead operated rather like an irregular ecosystem?

One immediate consequence of this research is that it goes back to the basics of modern technology. The way almost all machines work today needs to be reconsidered. The mechanical elements of ENTITIES are very similar to Leonardo Da Vinci's mechanics, such as hinges, levers or pivots. This kind of mechanics gives the installations something magical, as if the moving objects are not real, as if gravity does not exist.

One could argue that "performance" in an artistic environment is something exclusively human, or at least reserved for living beings. However, the relationship between performance and unpredictability could be even more essential. When an object and its energy source are completely self-sufficient and its movements unpredictable, it becomes an entity with its own independent cycle. It is no longer just "serving" or performing for people, but has a life of its own. Between old and new techniques, old materials and science fiction, between heaviness and lightness: the entities are hybrid sculptures for a time in search of a new balance.

Le Fresnoy - On the Other Side 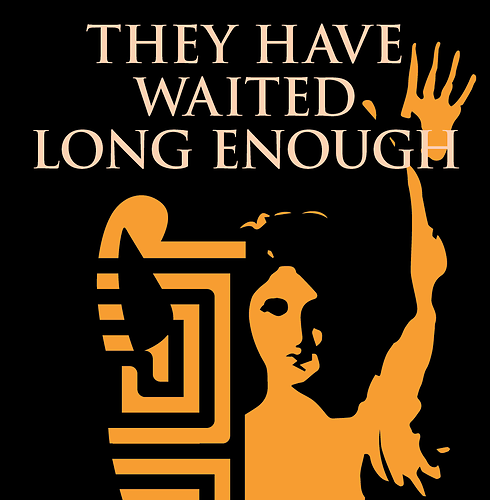 MEDEA / They Have Waited Long Enough

Composers Annelies Van Parys, Aftab Darvishi and Calliope Tsoupaki create new, contemporary sounds for three women who have had to wait in the wings of the great Greek myths far too long. They shine a new light on these women’s stories, add a new nuance to them and infuse them with new power. Is Medea a revengeful monster or a mother consumed with compassion? Is Circe an evil witch or a heroine filled with great humanity? And what about Penelope’s so-called helpless waiting?

Author Gaea Schoeters found the words that do these women justice: moving yet liberating. Soprano Katharine Dain sings them to life accompanied by the all-female Ragazze Quartet. Three colorful soloists engage in an intense dialogue on clarinet, duduk and canun.

Evelien Roels, classicist and compelling storyteller, provides the three characters with an introduction.

"Every time we play this program, something magical happens on stage. The stories of three Greek heroines, retold by three female composers. In this concert we are complemented by the warm sounds of duduk, clarinet and canun, plus one of our favorite singers Katharine Dain."  — RAGAZZE QUARTET 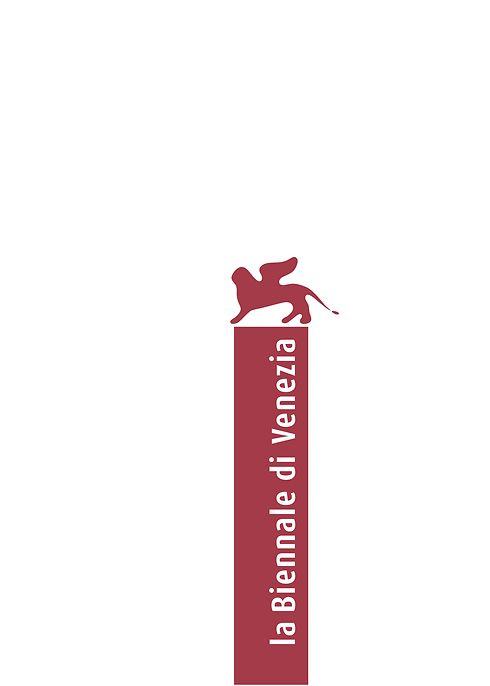 What is freedom? And what are you willing to sacrifice it for?
During an illegal protest action, a young activist is arrested. She is locked up for the night together with an older barmaid, who’s been accused of killing her husband. The two women unwillingly share the small prison cell: their forced togetherness starts out on a tense note, but as time passes they open up to each other. First reluctantly and uneasily, then more intimately, they share their fears and hopes. Sheltered by the night, they look back on their lives, and wonder what freedom really is and what they are willing to risk it for. And if the end justifies the means, even if that means breaking the law. Where at first they have no understanding at all for each others actions, they soon find out they have more in common than expected. Their encounter, confined in time and place by their imprisonment, becomes an internal journey that will change them both.

Just like in Adriano Banchieri’s (1605/1623) madrigal cycle Barca di Venetia per Padova (two) people with a very different social background are brought together by coincidence — or is it fate? — and forced to spend a certain amount of time together in a limited space. And just like Banchieri’s travellers, these two women are ‘in the same boat’... Composer Annelies Van Parys’ music enters into dialogue with the Banchieri madrigals, as librettist Gaea Schoeters weaves the old texts into the new libretto and the vocal ensemble paints a picture of the events that led up to incarceration of both women. The two soloists share their thoughts and feelings not only with each other, but also with the audience, as they comment on their own situation — thus turning Notwehr into a performance that is both playful and touching, light and dark. Staged by Sjaron Minailo.

Dedicated to Maria Kalesnikava & all other brave women who lost their freedom fighting for a better world. 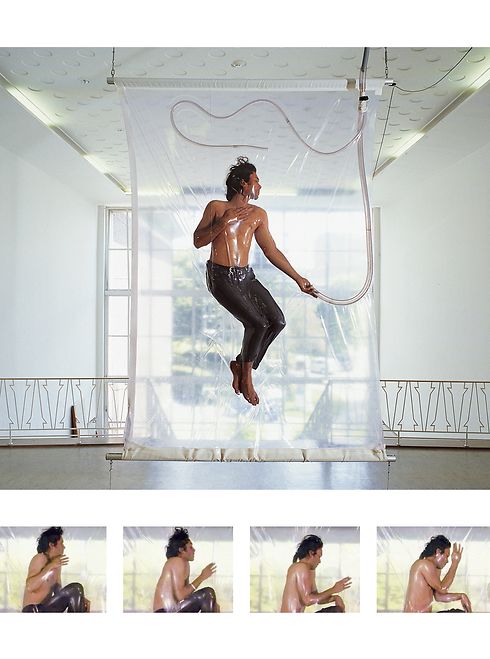 SHRINK 01995
Two large, transparent plastic sheets and a device that gradually sucks the air out from between them leave the body (in this case the artist himself) vacuum-packed and vertically suspended. The transparent tube inserted between the two surfaces allows the person inside the installation to regulate the flow of air. As a result of the increasing pressure between the plastic sheets, the surface of the packed body gradually freezes into multiple micro-folds. For the duration of the performance the person inside moves slowly and changes positions, which vary from an almost embryonic position to one resembling a crucified body.

The future is
Today, you can choose your social media pronouns and decide how you want to be defined. It hasn't always been that way. It was not until the 1970s that homosexuality was decriminalized in Norway. Sexual liberation was connected to the student revolution that raged throughout the West. It was a time for new ideas and utopian visions of the future. The exhibition seeks to find a way back to this optimism of the future–a non-binary society–where anything is possible and where everyone can fly. What might a non-binary society look like? The exhibition is a laboratory, an investigation, a thought experiment over a utopian future society. 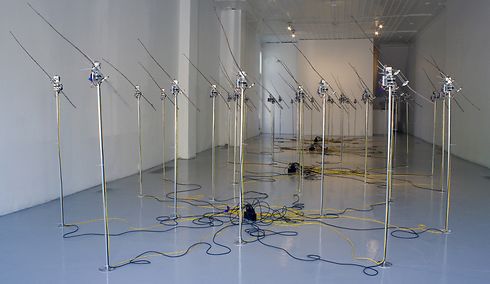 The 50 twigs in this installation point in unison in the direction of the oldest piece of spacejunk currently above the horizon in their location. The invisible network of forgotten debris being tracked are spent rocket bodies, parts from defunct satellites and wayward tools launched in missions as far back as 1958. Constantly circling the earth at over 17,000 miles per hour these unseen distant relics enter our physical space approximately every 90 minutes. With decaying orbits the debris rise and set in ever changing arcs. As if compelled by phototropism, the twigs collectively strive in unison bending toward these tiny, invisible, inert suns sweeping across the sky. When the debris being tracked drops below the horizon the twigs all go to a downward pointing position and await the rise of next orbiting fragment. 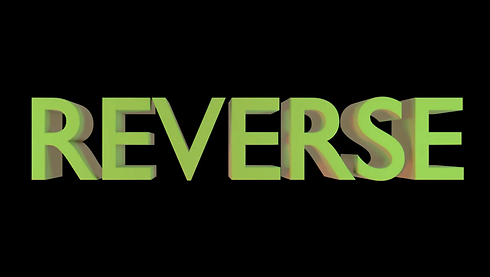 Laura Colmenares Guerra has been selected to participate Labverde - Arts Immersion Program in the Amazon.

Laura will be working on 360º cinematic images for a VR project that's currently under production. 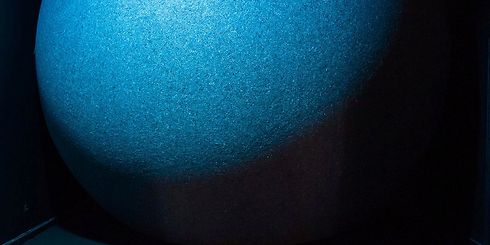 PELLET - An enormous sphere is lying in semi-darkness. It’s not immediately clear what material it’s made of or how much it weighs. Or is it a projection? This ambiguity makes it something mysterious and alienating. As a spectator, you are standing next to an object with a life of its own that’s not easy to fathom. The basis of this installation, PELLET, is Franz Kafka’s short story ‘The Cares of a Family Man’ (1919). In this story, the family man mentioned in the title talks about Odradek, a mysterious creature that regularly lives with him at the bottom of the stairs. Odradek consists of a star-shaped spool with tangled yarn around it, to which a stick with a kind of leg is attached. Odradek can talk and move but is otherwise a ‘useless’ object. As with Odradek, it is pleasant to be in the company of PELLET. But at the same time, it’s a disturbing figure that makes you think about the hidden life of objects. Both PELLET and Odradek are examples of how crossing the boundaries that separate subject and object can lead to an eerie experience. ‘Living things’ with human characteristics are literally impossible to identify and acquire something oppressive and uneasy. The alienation caused by objects was a way for Kafka to talk about how modern man becomes alienated in a world of new technologies, violence and bureaucracy. This is also a feeling that PELLET evokes in the viewer: if objects and systems continue without needing humans, what is our place?

PELLET was part of K, a society (2010), a series of ten installations for which Kafka’s work was the starting point. As a ‘performative object’, it is characteristic of the way in which objects and machines are as performative as human dancers and actors in Kris Verdonck’s work.