In the early 1990s Kiki Smith caused quite a stir with her work about the human body. At that time AIDS was spreading rapidly, as was puritanism and, in its wake, censorship, promoted by the then republican government. The social context lends Kiki Smith’s work a strongly political dimension. Though the artist reduces the body to what it really is – a self-sustaining system of organs and bodily fluids – it is obvious that for Kiki Smith the body is not merely physical. The spiritual power and vitality that surface from these works illustrate that the body is more than just matter subject to laws and patterns.

In the mid 1990s the artist increasingly emphasizes the spiritual and mythical aspect in her work. Kiki Smith focuses expressly on nature, the animal world, the universe and the position of women in fairy tales, myths and religious narratives. She calls attention to the intuitive, the chaotic, the organic and the creative, all of which have been treated as insignificant in our rational Western culture.

Kiki Smith rejects an idealized worldview. Instead, she creates her own universe in which she presents us with an exceptional combination of wryness and poetry, beauty and pain. She mingles childish wonder with mature wisdom of the world in works that cannot possibly leave anyone indifferent. Their material beauty is amazing, though sometimes hard to digest. 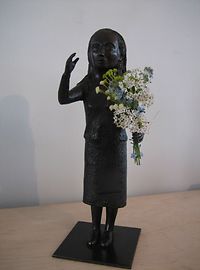