Hermann Nitsch (Vienna, Austria, 1938) founded the Orgien Mysterien Theater (OMT) in 1957. With the OMT he takes a step towards the realization of his ultimate aim: a global work of art which is to last for six days and which centres around the themes of the mystery play and orgy. The OMT resulted from Nitsch's involvement with culture and informal and abstract painting, but its origins also go back to the tradition of religious rituals. Nitsch produces his paintings in series. For example, preparing a performance for the OMT, he spills red paint on the canvas which he then works with his hands. For Nitsch, art means catharsis. Painting is an energetic process which emanates from direct expression. Red, as a symbol of joy, ecstasy, fire and blood, is his favourite colour. Nitsch is also one of the leading figures of the Wiener Aktionismus, a movement, which, like the 'happenings' of the sixties, sought to break new grounds.

The significance of Nitsch's work has long been recognized. Already in 1972 he was invited to participate in the Documenta, and in 1982 he participated again. On the occasion of the world exhibition in 1992 in Seville, a retrospective exhibition of his work was organized, which then travelled to various cities, like Vienna, Rome, Luxembourg, Palma de Mallorca, Linz,... In 1995 the Viennese opera invited him to collaborate on the production of Jules Massenet's opera 'Hérodiade'. He took care of the setting, costumes and direction. The '6-Tage-Spiel' (six-day play) was staged for the first time in Prinzendorf in 1998. In 2007 the Hermann Nitsch Museum opened its doors in Mistelbach (AT). 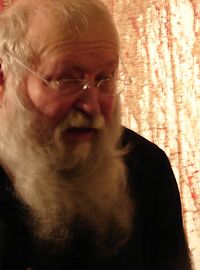